These forms include divorce petitions and complaints, final divorce decrees, settlement and separation agreements and pre and post nuptial agreements.

Popular - Divorce and Marriage forms for use when a couple separates or decides to divorce. 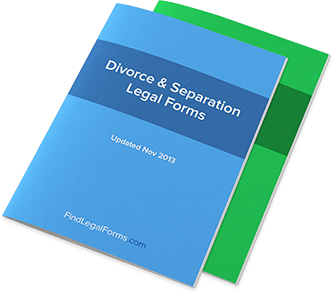 What are divorce forms?

“Divorce forms” is a term that encompasses a wide range of contracts and documents relating to the filing, settlement, and completion of a legal divorce. These documents include divorce petitions and complaints, marital separation and settlement agreements, as well as pre-and-post-nuptial agreements and amendments.

While each of these individual documents and agreements serve a specific purpose, they are all considered to be divorce forms that help expedite and complete the overall legal act of a divorce. Some documents will be required and some will not, depending on the individual divorce situation of the parties involved.

What kind of divorce forms are there?

There is a wide range of divorce forms that help two parties to make their settlements and arrangements enforceable by contract law. These include:

While these are some of the most important divorce forms you can use, there are a number of other forms that may still be relevant to your individual situation, such as Alimony Past Due notices.

Which divorce forms do I need?

Determining which divorce forms you need will depend on your specific situation. If you are getting married and want a potential plan in place, a Prenuptial Agreement will probably work best for you. If you are already married and want a similar plan in place, you and your spouse would require a Postnuptial Agreement. If you are already on the receiving end of a divorce filing and want to agree to the process, you may want to pursue Divorce Appearance, Consent, and Waivers.

What about if I have/don’t have children?

Having or not having children can be the most important variable that affects your divorce. This variable will also impact the specific divorce forms you need to use. There are two frequently-used documents that will vary wildly depending on whether or not you have children:

If you are planning to download any forms yourself, it will be important for you to make sure that you are downloading the correct ones. Divorce forms tailored to your child situation are widely available.

When are divorce forms enforceable?

Because each divorce form is different, the enforceability of each specific document will similarly rest on different factors. In some cases, these forms will not require enforceability between two parties at all but instead simply need to be filed with the courts (as is the case in Complaint/Petition for Divorce documents).

What are the requirements for divorce documents to be valid?

The validity of divorce documents hinges on the same factors as most contracts. Agreements between two parties will require that each party lawfully gave their full consent, and that the provisions of said agreement were also lawful. Divorce documents, such as Complaints and Petitions, will also need to be filled out accurately and filed properly if they are to be considered as valid by a court of law.

When is a divorce document effective?

In the case of Prenuptial Agreements, the document in question is effective assuming its validity is not in question and the two parties have got married. Other divorce documents – such as Marital Settlement/Separation Agreements – are effective contingent upon court approval and finalization of the divorce.